It’s a sight to behold – the majesty of the Thiruvalluvar Statue that can be seen from a long distance. It stands tall at 41 metres, with the deep blue sky and resplendent sea in the backdrop. Located on a rock, right next to the Vivekananda Rock Memorial in Kanniyakumari, the breathtaking statue of Thiruvalluvar was created by the Indian sculptor V. Ganapathi Sthapathi and was dedicated to the people of Tamil Nadu on January 1, 2000 by the then Chief Minister of Tamil Nadu M. Karunanidhi.

Thiruvalluvar was a celebrated Tamil poet and scholar and is best known as the author of ‘Tirukkural’, a collection of couplets on matters like ethics, politics, economics and love. Tirukkural is considered one of the greatest works in Tamil literature. The total height of the statue and the pedestal combined is 133 feet (41 metres). It denotes the 133 chapters of the Tirukkural. The sculpture of Thiruvalluvar is 95 feet (29 metres) and it stands on a 38 feet (12 metres) pedestal that represents the 38 chapters of virtue, the first of three books of the Kural text. The second and third books – wealth and love respectively – are represented by the statue itself. The statue weighs 7000 tonnes in total. The statue is built as per Indian architectural styles, and is hollow inside. However, tourists are allowed to climb only up to the foot of the statue.

Along with the Vivekananda Rock Memorial, the statue attracts millions of tourists annually and is one of the must-visit spots in your trip to Tamil Nadu. 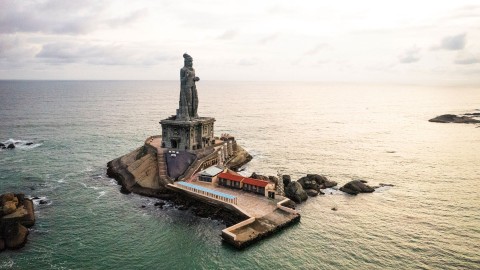