Gudalur in the Nilgiris district has it all. Picturesque mountains, valleys, evergreen forests, tea and coffee plantations, all of which make this less-explored locality a compelling destination.

Gudalur lies in the meeting point of Mysore, Ooty and Calicut cities, connecting the three states of Karnataka, Tamil Nadu and Kerala. There are many stunning tourist attractions around Gudalur that no travel bug should miss exploring.

The Mudumalai Tiger Reserve, just 15 km away from Gudalur, is a haven for Nature lovers and shutterbugs since it allows one to watch wild animals in their own natural habitat. Located in the Western Ghats, the Mudumalai Reserve is the right spot for thrilling wildlife safaris where wild animals like tiger, leopard, Indian gaur and Asian elephants can be spotted. Bird watchers can try their luck locating the critically endangered Indian white-rumped vulture and long-billed vulture, among the 266 species of birds found here.

On the road from Mysore to Ooty is Needle Rock viewpoint, another attraction near Gudalur that offers picturesque views of Gudalur, the Mudumalai National Park and Bandipur. Also known as “Oosi malai'' in Tamil, owing to its conical shape, the needle rock point is famous for its spectacular views, especially during sunrise and sunset. It has obviously been a part of many Tamil movies where the mountains, shrouded in clouds, and the dense eucalyptus trees form the best backdrop.

Frog hills are a part of the Nilgiri mountain ranges that lie on the road from Gudalur to Ooty. The hills resemble a frog when viewed from a distance.  Hence  the name. The jaw-dropping panoramic views of the tea estates, the verdant environs and the tiny villages seen from the hills constitute a delightful experience.

Another offbeat location near Gudalur is the Santhana Malai Murugan temple situated atop the hills. The Hindu temple is dedicated to Lord Murugan and is surrounded by lush greenery, dense forests and meandering streams.

Nambalakottai is another temple located at an elevation of 3513 m that has all the charms of an ancient shrine. Believed to be around 1,700 years old, this shrine is sacred to the Mandadan Chetti community, and is dedicated to the tribal God Betarayasvami (the Lord of the Hunt). Amidst the enchanting Nilgiris mountains, this sacred site offers breathtaking views of the Pykara river and the great expanse of the valleys and hills. 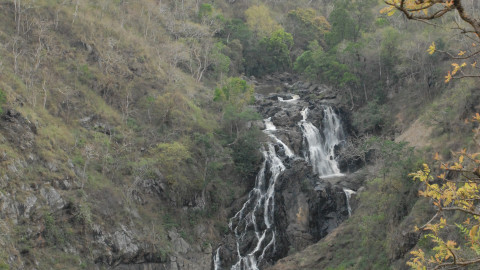